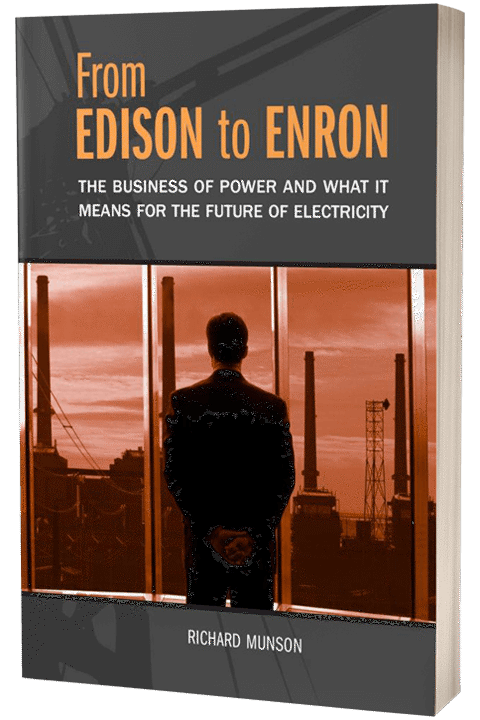 From Edison to Enron

The blackout of 2003 illuminated just how dependent America is on electricity. It was not just that some 50 million people in eight states and Ontario were cut off from their televisions, microwaves, ATMs, and email. Without the electrical juice to keep their sockets alive, factory managers were forced to close production lines, city managers shut down water deliveries, grocery store clerks watched their frozen inventory slowly melt away. Economists estimated that the blackout cost Americans $5 billion even as energy analysts were predicting that a similar blackout could happen again. The catastrophe forced us to marvel at the unusual ability of sub-microscopic particles to move like waves inside a wire and cause bulbs to glow. It highlighted the complex requirements for managing the massive generators, transformers, transmission lines, and switch boxes needed to tap and deliver flowing electrons. It encouraged us to recognize the profound impact of electricity on all aspects of commerce and culture.

Such events as the blackout, the Enron debacle, and the California brownouts also reveal the cracks in a 100-year-old industry structure that have been building ever since Thomas Edison, George Westinghouse, and their contemporaries first managed to harness electricity and make it available to the masses, and tycoons, such as Sam Insull and George Norris, began to concentrate financial control and political influence. From Edison to Enron traces the controversial history of this $210 billion industry―the nation’s largest―showcasing the key individuals, technological innovations, corporate machinations, and political battles that have been waged over its domination. Munson maintains that today’s technological and regulatory infrastructure, as a function of its history, is a relic that has long outlived its usefulness; he points out that two-thirds of the fuel burned to generate electricity is lost, that Americans pay roughly $100 billion too much each year for heat and power, and that environmentally unfriendly generators are the nation’s largest polluters. Meanwhile, innovations in technology and business models are being blocked by entrenched monopolies. Ultimately, Munson argues that current policies and practices, including those favored by the Bush Administration, are preventing entrepreneurs from producing more efficient, healthy, and sustainable power supplies. Moreover, he presents an agenda for business and policy reforms that will stimulate economic development in the United States and around the world.

“From Edison to Enron is a compact history of U.S. electrical utilities that demonstrates the urgent need for reform and explains how Americans can use new technologies to become more efficient, less dependent on oil imports, and more environmentally responsible. This book is not only essential reading for anyone who cares about the electric bill, but also for anyone concerned about what we bequeath to the next generation.”

“An extraordinarily comprehensive and enjoyable historical portrait of the nation’s most critical energy supply system, and its indispensable engine of progress and prosperity. This splendid book is as readable as it is rigorous in its fascinating journey through the creation and the evolution of the electricity enterprise in the 20th century. What set Munson’s work apart is his probing exploration of the powerful and diverse personalities who collectively shaped what has become the world’s largest and most complex machine.”

Order From Edison to Enron